Renovations for the studio and office complex began late 1987 in Wills House on Leichhardt Terrace. After all the television production and transmission equipment was installed, a total of 5 staff members moved in. Imparja started with 8 retransmission sites at Ceduna, Coober Pedy, Leigh Creek and Woomera in South Australia and Alice Springs, Tennant Creek, Katherine and Bathurst Island in the Northern Territory.

Imparja (pronounced IM-PAR-JA) is the anglicised spelling and pronunciation of the word Impatye, meaning tracks or footprints in the Arrernte language. Arrernte (pronounced AH-RUNTA) is the traditional tribe and language of the Alice Springs region.

The original Imparja logo was developed by an Arrernte artist and traditional owner who is not only credited with developing the logo but also the original painting on which it is based. The logo symbolises the meeting in Alice Springs of the Todd River and the Yeperenye (pronounced YEP-A-RENYA) Caterpillar dreaming moving along the MacDonnell Ranges at Heavitree Gap.

Imparja is a free-to-air television broadcaster. Its signal is sent out across the vast viewing area, broadcasting from 28 transmission towers as well as more than 20 remote towns who retransmit the signal on low-watt transmitters. Imparja also broadcasts direct to home by satellite to some 200 very remote indigenous communities and 75,000 homes within its license area.  Imparja provides these services on the VAST platform which also provides digital infill for all black spots east of the W.A. border.

Imparja also provides satellite services for 14 Indigenous radio services, at no cost to these organisations. 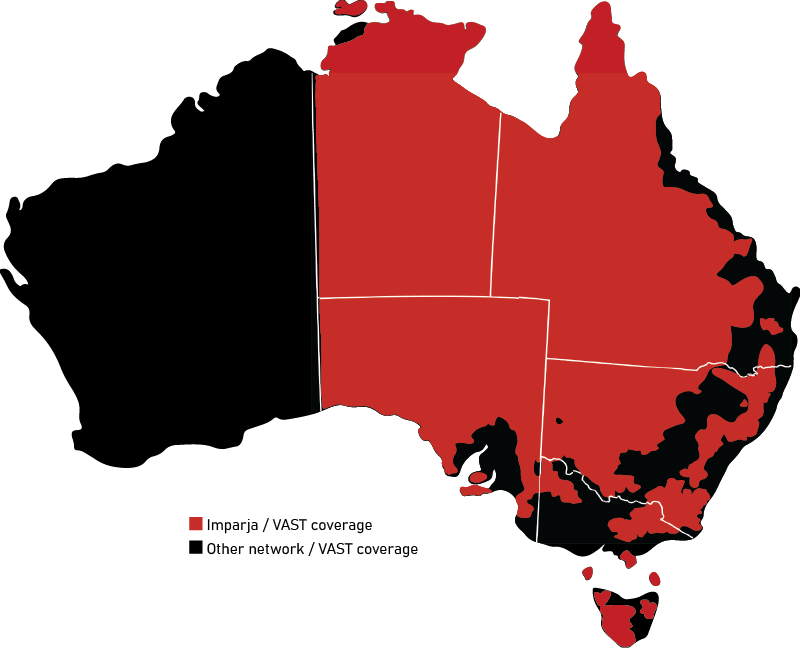